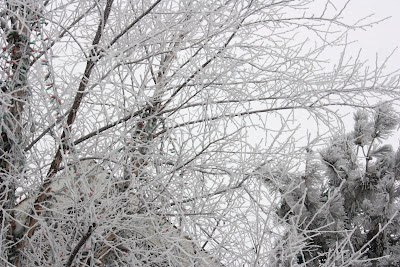 Oh my, the day of days is here.......Laura's Birthday Party. How we have waited for this day to come. Being that it was her first ever friend party, we just had to do it up right. So first, we picked a fun theme: Pajamas. Pajamas, pajamas. Nothing better than waking up and not getting dressed on a Saturday. And seriously, what 6 year old does not love lounging around in pajamas all day? None that I have met! And the best part of a pajama party? You get all the fun and excitement of a sleepover type party without the actual "sleepover" part. Haha!

Once we picked out the theme, we made some invitations. Completely cute invitations, if I do say so myself. 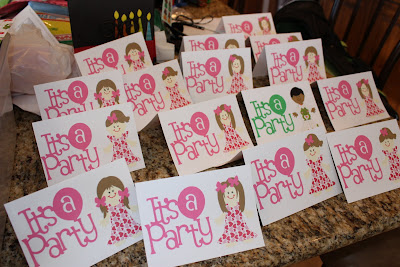 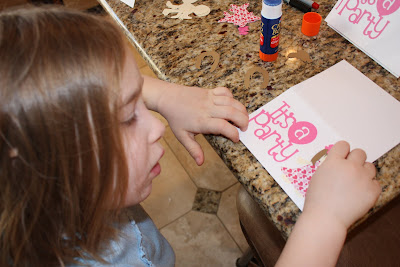 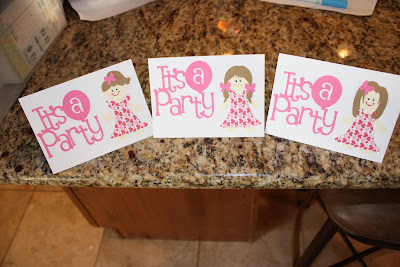 We made these with my dormant Cricut machine that I have had for over a year, but have had such little time to use it. Such a shame.
A sweet special invite for the one boy invited to the party. Just to clarify, Laura stated, "He's not my boyfriend, I just love him so much!" 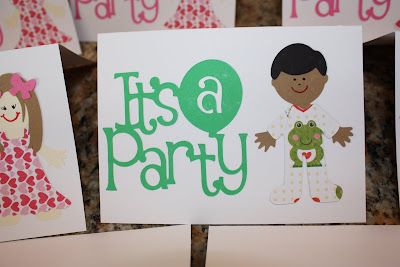 Laura's nasty cold threatened cancellation of the whole ordeal, but after a few doses of Tylenol, and a bowl of oatmeal, Super-Laura was ready for action. PJ's and all. 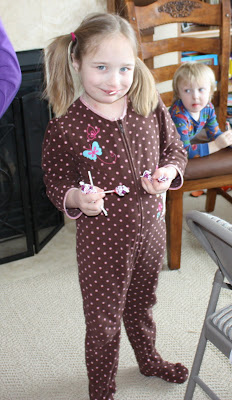 The kids played games, like Toss the Stuffed Animals to Dreamland, and Lollipop drop. 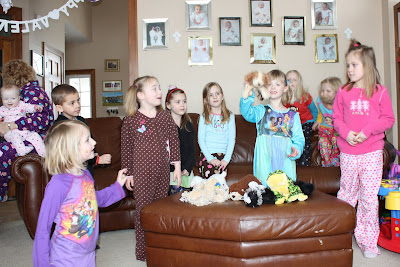 They visited the spa, where nearly all of them chose to have their nails done by the famous Auntie Erin. 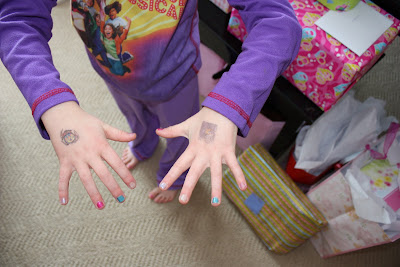 They made pillows. Super-soft, fleece knot-tied pillows. Cuz what's a pajama party without a good pillow? 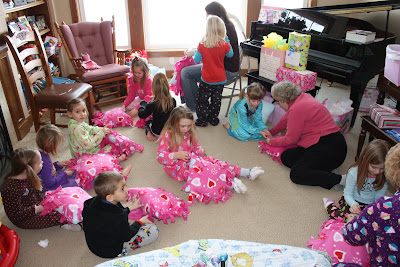 A tip for any of you considering such a fantastic activity at your next party with Kindergartners: out of the 11 little kids there, only one knew how to make a knot prior to this activity. ONE. And she was in second grade. Thankfully, a couple of girls(and the one boy) were quick learners, so we weren't tying all 11 pillows on our own.
After the rather long pillow making session, they all cuddled up to hear a bedtime story given by Auntie Erin. 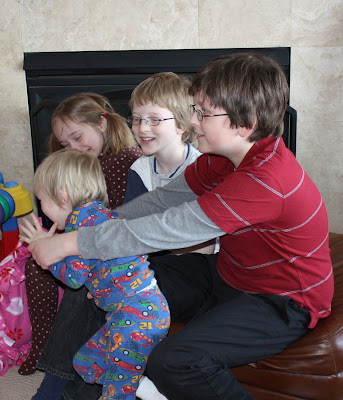 This was followed by an interactive story led by Jonny and Crispy. They had those kids giggling so hard, I was sure someone would pee their pajama bottoms. 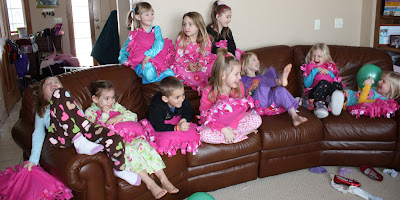 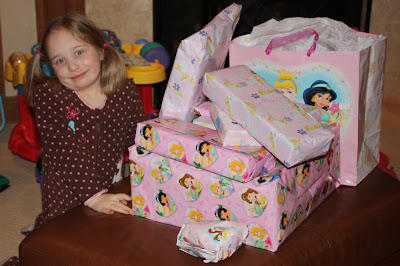 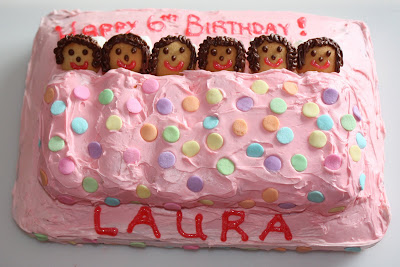 Cute little pumpkins tucked under a pink polka-dotted blankie, their heads nestled atop squishy marshmallow puffs, no doubt all comfy and cozy in their most beloved pajamas.
Chocolate ice cream with marshmallow ripple suited the chocolate cake quite well. Yes, Laura is our chocolate girl. 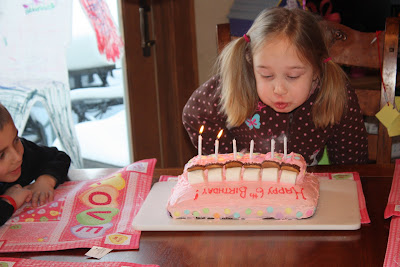 In fact, while I was pregnant with her, she forced me---a self-proclaimed NON-chocolate person----to eat something chocolate every single day. Every. Single. Day. Though so very strange at the time, her love of chocolate was evident even before she was born....and is easily apparent now. In fact, her present that Papa Don sent her was one of her most favorite. It was a cardboard shipping box filled with chocolate! Does he know her, or what?!? 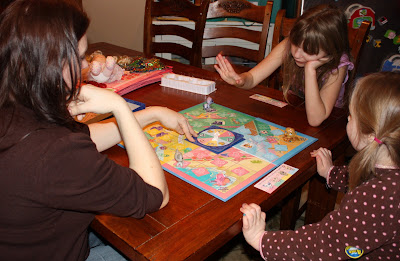 The party was a success, and we were all ready to just "chill out" with the family pizza party that followed. Honestly, though there were 2 Grandmas, one Mommy, 2 older brothers, (the older sister was smart enough to hide upstairs), one Daddy, and one very capable Auntie who thankfully was well versed in all-things-girly, we were almost no match for these little girls (+one boy). They were loud! And squirlly! And hyper! And, well, insisting on pillow fights! 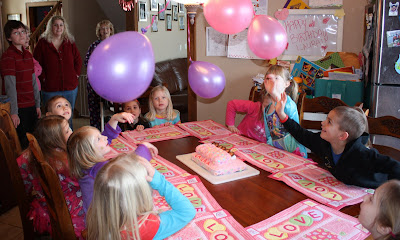 I will choose to believe that it was simply because they were having so much fun.....because it is inconceivable that a bunch of little girls would be more stressful, er, I mean excitable, than a bunch of little boys at a party only three weeks earlier. Right?!? Oh wait...would that mean that the boys didn't have fun at Crispy's party? Oh dear, I think they did. Certainly today, I know Laura did! And that is all that really matters for now.
Posted by Blessed By 8 at 9:04 PM

Blessed By 8
We are a family blessed with 8 wonderful children and one big Bernese Mountain dog. We are all about home schooling our kids, being active in music and theater arts, passionate about our Christmas Lights and Music Family Ministry, spending time together, being silly, but most of all loving Jesus with all our hearts. Things are always busy here and constantly changing. Come visit us anytime and see what's happening!

....give thanks in all circumstances; for this is the will of God in Christ Jesus for you. 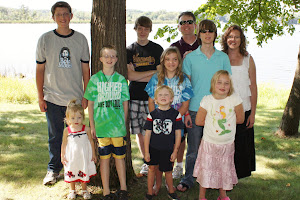 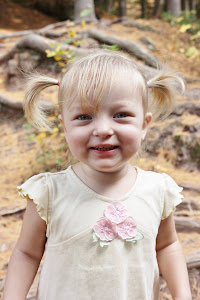 a.k.a. Neezy
Born the youngest of this funny crew, she is surely not little on personality. Our own little monkey, capable of climbing any structure with ease and agility, holding onto you securely around the neck for hours, and living off of a simple diet of cheese and marshmallows...she brings us unlimited joy and entertainment, overflowing with a generous outpouring of love sprinkled with giggles and kisses. 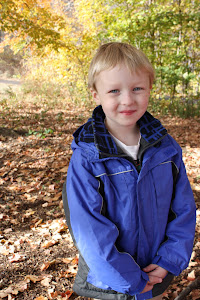 a.k.a. Tubby
Short in stature, but big on sweetness, is lucky number 7. Always kind, with a loving heart, he shines with happiness and joy even on the darkest days. A lover of Batman, Star Wars, Cars, and all things boy, this little dude really rocks. 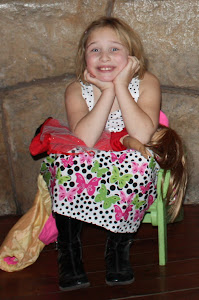 Evidence of a true living miracle in our midst, she has been tough since before she was born. Creative and smart, stubborn and persistant, one way or another, this girl WILL get her way. She's got big ideas and a big heart, plenty of love to share, and we couldn't be more thankful for her in our lives. 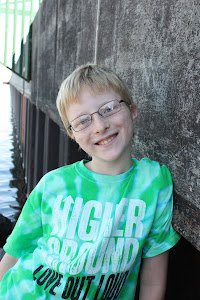 a.k.a. Crispy
Content and sweet from day 1, he is easygoing and willing to compromise, but strong in his values and faith. He is always eager to lend a helping hand and will see to it that his given tasks are complete. You can find him running with friends in the neighborhood, playing chess with someone at the kitchen table, or building new creations with legos in the basement. He is everybody's best friend. 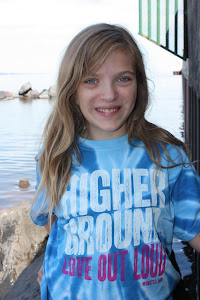 Our first girl, our little princess, born with unceasing determination and strength. She is eager to try most anything and "won't give up no matter what." Our inspiration and creative genious, she has shown us what it means to give it your all. She has a passion for writing and plays, music and performance, but most of all, for sweet Jesus. 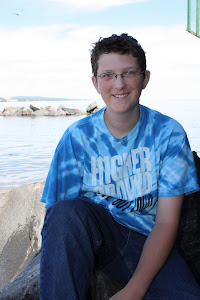 a.k.a. Jonny
Born as boy #3, he is anything but third rate. This boy excells in all that he does, be it academics, music, or theatrical performance. He plays leading roles inside our home as well as on stage. He is our right hand "man" and creative playmate for his younger siblings. Someone we can count on for just about anything, he certainly earns his keep around here. 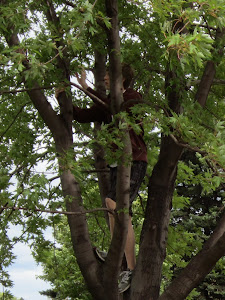 Born with the spirit of an adventurer, he is confident in all he does. Retiring his hockey career to pursue music, he has risen as a leader in his craft. Dedicated and detail oriented, he will do any job correctly, and we relish the knowledge he shares with us. Intelligent and responsible, nothing can get past this big brother of many. 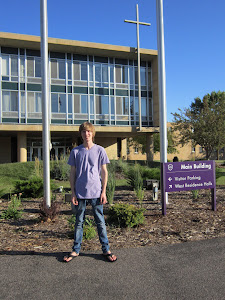 Alex
Firstborn of this crew, he has proven his namesake as "defender of kidkind". Looked up to big brother, beginning his journey on his own as he now has entered college. Studying New Testament with Greek emphasis, he has a heart for God bigger than any mountain, and will follow Him wherever He leads. Though born to us more than 18 years ago, he is God's boy through and through.